Few 20th-century books have had more impact on society than Scouting for Boy, the world’s first Boy Scout handbook (and, in many ways, an introduction to Boy Scouting to the world at large). First published in as a six-part serial in 1907, the book later appeared as a single volume and later still (after Scouting spread around the world) in a “world brotherhood” edition.

This app, Scouting for Boys, is not just a digital version of the book. (In fact, you’d be better off buying a print or Kindle version if you just want to read the book.) Instead, the book provides facsimiles of the original serial version’s pages, the pages of Baden-Powell’s typescript that still exist, a variety of correspondence related to the book’s publication, an essay about the book’s development, a gallery of images from the book, and even three early reviews of the book. Here’s an excerpt from one of those reviews:

The object of the gallant general appears to be to induce the little boys of this country to be up and doing, to imitate the prowess of Richard the Lion-hearted and the Crusaders who careered around the world in days of old when knights were bold. He shows that there may be peace-scouting as well as war-scouting, for has not Milton told us that “Peace hath her victories no less renowned than war!” Thus, when war’s alarms do not call the little boy to fight for his country at the front he may serve her by removing a piece of banana-skin from the pavement or by helping an old lady across the road–excellent and sound advice.

The app is not perfect–three B-P videos it links to never loaded for me–but it’s nonetheless a fun way to explore Scouting’s founding document. 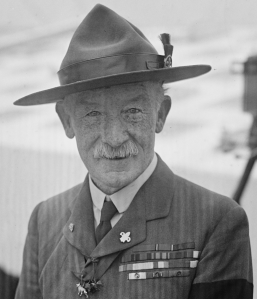 Today is the birthday of Robert Stephenson Smyth Baden-Powell (1857-1941), founder of world Scouting. As Scouting becomes ever more diverse, I found this quote from B-P to be especially timely:

“Scouting is a brotherhood – a scheme which in practice disregards differences of class, creed, country, and color, through the undefinable spirit that pervades it – the spirit of God’s gentlemen.”

The quote comes from the 1944 World Brotherhood edition of Aids to Scouting. I’m not sure B-P would have said that when he first created Scouting since his initial focus was more on building good citizens for Britain than on fostering world brotherhood.

Isn’t it great how Scouting expands the horizons of Scout and Scouter alike? 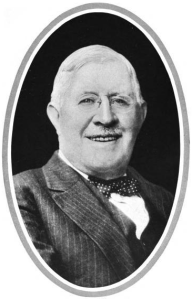 Boyce had, of course, been inspired to bring Scouting to the United States thanks to a chance encounter with an unknown Scout in London the previous year. Despite the legends we’ve all heard, Boyce didn’t get lost in the famous London fog, he (probably) didn’t meet Scouting founder Robert Baden-Powell that day, and he didn’t take a trunk full of Scouting material along on his African safari that fall.

Here’s how he described his encounter in a 1928 letter:

I was in doubt whether to try to cross the street when a boy about ten or twelve years old, I think he had a lantern or a light of some kind in his hand, asked me if I wished to cross the street. I told him I did, and he piloted me to the other side. I then offered to tip him and he refused it on the basis that he was doing a good turn as a Boy Scout. I was interested and asked him about his organization.

Beyond getting the organization set up, Boyce didn’t play much of a role in the BSA. He did, however, contribute $1,000 a month for administrative expenses (worth about $25,000 today) with one stipulation: Scouting could not discriminate by race or creed. (That stipulation is interesting since Boyce held the typical racial views of his time. Perhaps Scouting appealed to the better angels of his nature.)

Boyce went on to found the Lone Scouts of America, which merged with the BSA in 1924. Two years later, he received one of the first Silver Buffalo awards, along with Baden-Powell and the Unknown Scout.

For his part in creating the BSA, we can say, “Thank you, Mr. Boyce.”

Note: You can learn much more about Boyce in Janice Petterchak’s 2003 book Lone Scout: W. D. Boyce and American Boy Scouting–if you can find a copy. Amazon currently has 11 copies starting at $65!